By admin Posted on May 1, 2020 Posted in Feature Film, Narrative Fiction, News No Comments

By admin Posted on April 10, 2020 Posted in Drama, Narrative Fiction No Comments

Maggie and Miranda, survivors of a plane crash off the coast of Northern Canada, attempt to find sanctuary in a storm. After days of struggle, they stumble upon an Inuit camp only to find that another storm is brewing among the native people there. The lives of the survivors are once again threatened as a mystery unfolds — and it’s a secret that the Inuit have kept for countless generations. There is a place of calm, but first they all must face a storm.

Tagged with: Ring of Storms

Brynne Vaness can see the future, or so she says. And those that believe and those that do not believe will go to any lengths to prove it. What begins as a spiritual quest to understand her ability, quickly turns into a struggle for her life, pitting Brynne against organized criminals, terrorists and even Homeland Security.

As she learns more about her visions, both their power and limits become increasingly apparent, and Brynne finds that her own future – her own survival – is anything but certain.

An exhilirating action-adventure set in Portland.

As Danny heads to Portland on a road-trip to find his long-lost father, he encounters a long-lost girflriend, a drag queen girl group, the denizens of a wild sex club, and a viscious serial killer. And then there’s those two agents in black that won’t stop following him. And he may just survive if he can keep the swelling down on his serious head injury.

It’s a busy weekend for Danny in the City of Roses.

Karla Mason (Barrett) and John San Nicolas (Combs) reprise their roles as the killers with hearts of gold — gold, because all they care about is the money!

A ten minute long, chance encounter between a woman and a man profoundly alters their lives as they share their darkest secrets. This is a new, short film by Full Brain Films. It stars Karla Mason, and was written and directed by Greg Kerr with production design and assistant direction by Wendy Peyton. Nan Avant provided the score for this film. More information will be posted soon about venues the film will show in. 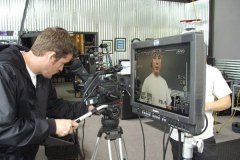 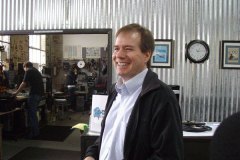 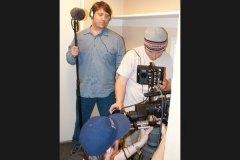 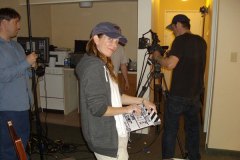 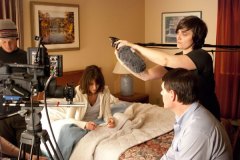 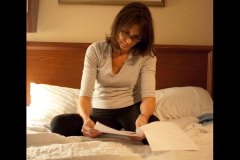 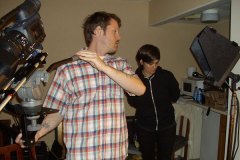 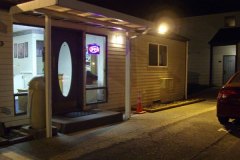 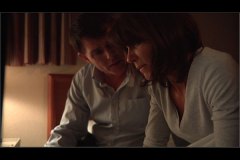 Waiting for a train has never been this exciting.

The search for lost luggage leads to bizarre encounters, diabolical terrorism, and even the key to winning a long-standing civil war in this existential farce which has little to do with the Samuel Beckett play Waiting for Godot. While the others in the Beckett play are just waiting around for him, we learn what has delayed Godot (pronounced Gu-doe. It’s French. Samuel Beckett wrote Waiting for Godot in French, although he was Irish. He later translated it to English. Yes, that is odd).

Rick Stokes delivers the ultimate straight-man performance as the unwitting and unwilling Godot as he bumbles from one encounter to another. With a good dose of Monty Python-esque dialogue and homages to the old school comedy of Jack Benny, the Three Stooges, and Abbott and Costello, this is an independent film that was almost not completed thanks to the weather, a not-so accurate train schedule and that unfortunate bomb scare. 70 minutes, original and classic songs, suitable for general audiences.

A stranger visits a small, Northwest town to learn about the mayor who the townspeople revere. What she finds is far from typical: in their schools they teach their children an invented language instead of English, a Good Humor man drives by and delivers puppies to all the kids instead of ice cream, and all the townspeople are required to work on some gigantic building project in a nearby field.

When she finally meets the mayor, she learns a disturbing secret. And then he learns a few secrets about her, too.

The Puppy Man is a dark short with original music and an all Portland cast and crew. 35 minutes.

Unremembered (Indie Fest and Accolade award winner, feature film) is a complex thriller told in non-linear time about a man who has no past. This independent sci fi film follows the alternate reality journey of John Outis (Tim Delaney, Indie Fest award winner, lead actor) over sixteen days as he tries to restore his fractured life history. But the more his dark past comes into focus, the more the lives of his friends, his wife, and his lover are altered.

As his past threatens to end his future, he turns to Tina Plantes (Karla Mason), a brilliant and unconventional physics professor. Drawn deeper into the bizarre events of John’s life, she discovers a disturbing and far-reaching set of truths about dreams, time, and the power of the human will.

Unremembered was made in Portland, Oregon by Greg Kerr for less than $32,000. It features Portland talent with original music by Nan Avant.